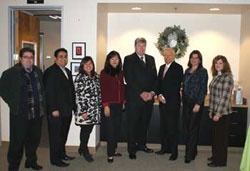 Law Biz® Blog Video:
Tips to Promote Your Services – Linda has 10 Tips for Promoting your Services, which Ed Poll shares with you in this video.

Linda Popky’s book, Promoting Your Non-Profit is featured as Dan Janal’s “Cool Book of the Day”.

Law Biz® Blog:
Doing business the “old way” must change or… – Linda is quoted in this blog entry.

The SAC® Release:
How Business Needs to Prepare to Exploit the Economic Recovery – The Society for Advancement of Consulting® (SAC®) asked its global membership to evaluate the current ideas to maximize the exploitation of the economic recovery when it inevitably arrives. Linda Popky is quoted.

Podcast:
Marketing in a Recession: Shattering the Myths About What Works and What Doesn’t – Pam Harper interviews Linda Popky.

The Almanac:
Two Woodsiders named among ‘top 100 women’ – Linda Popky, president of Leverage2Market Associations, was recognized for her service as president of Women in Consulting, a group of more than 400 consultants and small business owners in the Bay Area.

WIC Press Release:
Women in Consulting Names 2009 Board of Directors – Linda J. Popky continues for a second year as president.

Aerulean Press Release:
Aerulean® Announces the Addition of Advisors to Team – Linda Popky is one of two key advisors who have been added to Aerulean’s team.