Memo to Marathon Bomber: You Lose! Boston’s Still Up and Running!

Memo to Marathon Bomber: You Lose! Boston’s Still Up and Running! 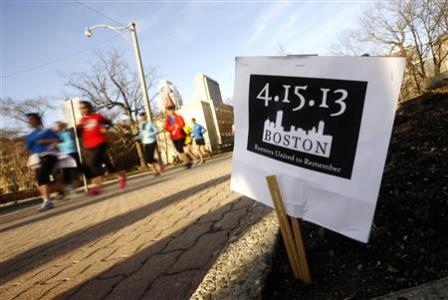 I’m not a runner. Never have been, never will be. But it’s virtually impossible to have lived in the Greater Boston area and not be impacted by the Boston Marathon.

The Marathon is a Boston institution. Just about all of us who passed through Boston for any period of time watched the Marathon somewhere along the route, perhaps right along the finish line in Copley Place. For years, I thought it even had it’s own state holiday. I was in Boston for nearly a decade before I learned Patriot’s Day is really about Paul Revere’s famous ride. To me, it was always about the Marathon.

Monday’s bombings were despicable–the loss of life and limb, the hundreds of people injured and thousands more whose lives were impacted by this terrorist act. Nails and ball bearings added to the mix to inflict additional injury.

The responsible persons have yet to be identified. But because this unidentified terrorist is too cowardly to come forward and take responsibility for the havoc he wreaked, I’d like to share a few thoughts with him:

You picked the wrong target.
The finish line of the Marathon? Yes, you caught a crowd of people who were in the wrong place at the wrong time, but you also had a medical tent full of highly experienced professionals who jumped into the fray quickly and no doubt saved lives and limbs with their timely assistance.

You didn’t count on the goodness of people.
After the initial blast sent people scurrying, many turned around and went back TOWARDS the blast to help the injured. Many runners continued past Copley Square to Mass General Hospital to donate blood. People jumped in to help, doing whatever they could.

You picked an area with world class medical care.
In another metropolitan area, Monday’s mass casualties might have overwhelmed the medical system. But Boston has such a wealth of top notch medical facilities that bounced into action and were able to divide up the injured and provide outstanding care for all involved.

You didn’t count on what we’ve learned since 9/11.
From law enforcement to first responders, local to state to federal–everyone came together and worked effectively and efficiently to respond to the explosions. We’ve learned the hard way that there are still people like you out there and we need to be ready to move at any time. The race against terrorism is a marathon, not a sprint, but our guys are out there pounding the pavement.

Contrary to what you hear in the media, our government still works.
Quite well, in fact. Don’t believe all that talk about sequestration crippling us. In spite of those who tell you we have to dismantle our overstuffed, slow moving government bureaucracy, we have built capabilities that come together and work well in this type of situation.Imagine that: our government does exactly what it’s supposed to do!

You forgot we have eyes and ears all around you.
This generation is nothing if not connected. At an event like the Marathon, there were probably tens of thousands of video feeds and camera shots, surveillance videos, Instagrams pictures, etc. Somewhere in all of that data, there’s a picture or 20 of you in all your glory. Even more important, we have the technology to crunch and sort through all of that Big Data and find you.

You didn’t realize that what doesn’t kill us makes us stronger.
Yes, you killed a few poor, innocent people and maimed a lot more. But you haven’t killed us as a country or a people. You haven’t squelched the spirit of Boston or the thousands of runners who line the streets every day, not just Marathon day.

I write this sitting at Logan airport waiting for my flight back to San Francisco. The mood in Boston is somber, as one would expect when you’ve experienced a severe loss. But it isn’t defeated or destroyed. Remember these are the people who waited nearly a century for their beloved Red Sox to win a World Series. These are the folks who find traffic signals almost as optional as the letter R in the middle of a word. You can’t keep em down. They’ll be back, stronger than ever. In spite of this short detour.